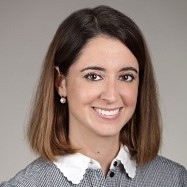 Dr. Daria Piacentino joined Dr. Lorenzo Leggio’s CPN laboratory in February 2018. She received both her M.D. and Ph.D. in Clinical Experimental Neurosciences and Psychiatry from Sapienza University of Rome. In 2013-2014, Dr. Piacentino was a Research Fellow at Sapienza University of Rome after being awarded an Italian Ministry of Research grant to investigate the use and misuse of anabolic steroids and new psychoactive drugs in a young sports population. In 2015 she received a Masters in Medical Statistics and Statistical Methods for Epidemiology from the University of Milan. In 2018, she completed clinical residency in Psychiatry at Sapienza University of Rome and Sant’Andrea Hospital. Her research has focused on the use of deep Transcranial Magnetic Stimulation for alcohol and cocaine use disorders, the effects of performance and image enhancing drugs (PIEDs) in athletes, the implementation of statistical models to investigate the harm due to substance use disorder, and the psychopathology and role of the gut-brain axis in functional gastrointestinal disorders. Dr. Piacentino has been the recipient of several awards, including an American Society of Clinical Psychopharmacology New Investigator Award in 2019. As a Visiting Fellow in Dr. Leggio’s laboratory, Dr. Piacentino is investigating alcohol use patterns and the link with psychiatric and medical features, as well as the role of the microbiome-gut-brain axis in alcohol-seeking behaviors. For the latter area of research, she was also awarded with a fellowship from the NIH Center on Compulsive Behaviors in 2019.