CDC Report: More than 3 million US women at risk for alcohol-exposed pregnancy

An estimated 3.3 million women between the ages of 15 and 44 years are at risk of exposing their developing baby to alcohol because they are drinking, sexually active, and not using birth control to prevent pregnancy, according to the latest CDC Vital Signs report released today. The report also found that 3 in 4 women who want to get pregnant as soon as possible do not stop drinking alcohol when they stop using birth control.

Alcohol use during pregnancy, even within the first few weeks and before a woman knows she is pregnant, can cause lasting physical, behavioral, and intellectual disabilities that can last for a child’s lifetime. These disabilities are known as fetal alcohol spectrum disorders (FASDs). There is no known safe amount of alcohol – even beer or wine – that is safe for a woman to drink at any stage of pregnancy.

“Alcohol can permanently harm a developing baby before a woman knows she is pregnant,” said CDC Principal Deputy Director Anne Schuchat, M.D. “About half of all pregnancies in the United States are unplanned, and even if planned, most women won’t know they are pregnant for the first month or so, when they might still be drinking. The risk is real. Why take the chance?”

Healthcare providers should advise women who want to become pregnant to stop drinking alcohol as soon as they stop using birth control. Most women don’t know they are pregnant until they are four to six weeks into the pregnancy and could unknowingly be exposing their developing baby to alcohol. FASDs are completely preventable if a woman does not drink alcohol during pregnancy.

For this Vital Signs report, scientists from CDC’s National Center on Birth Defects and Developmental Disabilities analyzed data from the 2011–2013 National Survey of Family Growth, which gathers information on family life, marriage, divorce, pregnancy, infertility, use of birth control, and men’s and women’s health. National estimates of alcohol-exposed pregnancy were calculated among 4,303 non-pregnant, non-sterile women ages 15–44 years. A woman was considered to be at risk for an alcohol-exposed pregnancy if in the past month she was not sterile, her partner was not known to be sterile, she had vaginal sex with a male, drank any alcohol, and did not use birth control. A woman was considered to be trying to get pregnant if a desired pregnancy was the reason she and her partner stopped using contraception.

Overall, 3.3 million US women (7.3 percent of women ages 15–44 who were having sex, who were non-pregnant and non-sterile) were at risk of exposing their developing baby to alcohol if they were to become pregnant.

“Every woman who is pregnant or trying to get pregnant – and her partner – want a healthy baby. But they may not be aware that drinking any alcohol at any stage of pregnancy can cause a range of disabilities for their child,” said Coleen Boyle, Ph.D., director of CDC’s National Center on Birth Defects and Developmental Disabilities. “It is critical for healthcare providers to assess a woman’s drinking habits during routine medical visits; advise her not to drink at all if she is pregnant, trying to get pregnant or sexually active and not using birth control; and recommend services if she needs help to stop drinking.”

View the CDC news release in its entirety at http://www.cdc.gov/media/releases/2016/p0202-alcohol-exposed-pregnancy…. For more information about alcohol use during pregnancy and FASDs from the CDC please visit www.cdc.gov/fasd. 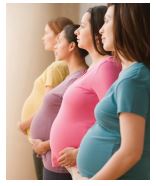 - Drinking and Your Pregnancy

- Treatment for Alcohol Problems: Finding and Getting Help