New clinical research supported by the National Institutes of Health shows that increasing the intensity of treatment for alcohol use disorder (AUD) over time improves alcohol-related outcomes among people with HIV. This stepped approach to AUD treatment also improves HIV-related disease measures in this patient population.  A report of the new study, led by researchers at Yale University, is now online in The Lancet HIV. 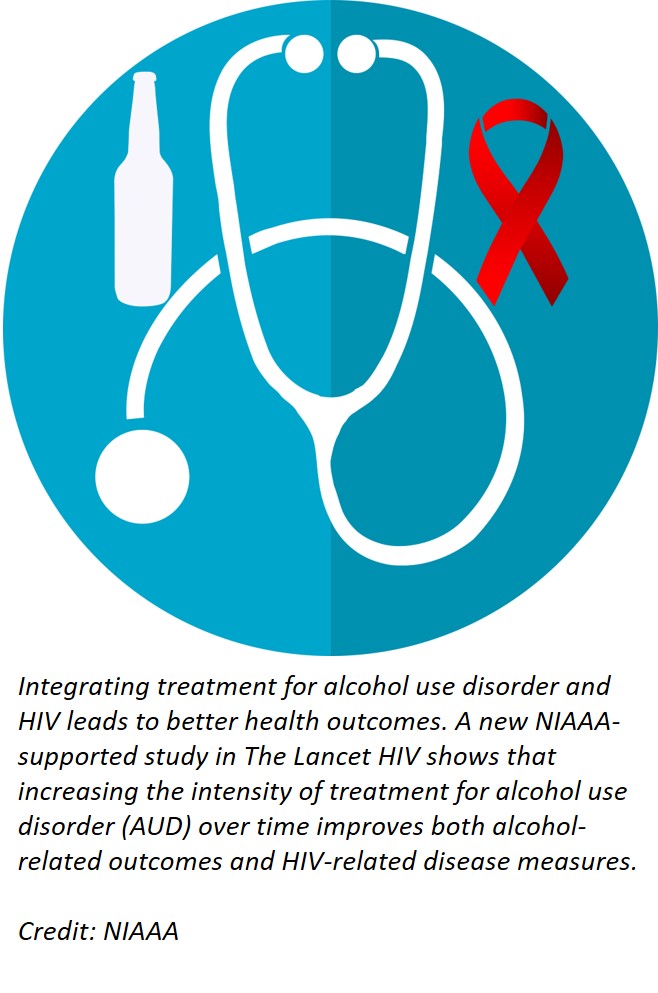 “These research findings demonstrate the potential of integrated treatment for AUD and HIV in improving health outcomes,” said George F. Koob, Ph.D., director of the NIH’s National Institute on Alcohol Abuse and Alcoholism (NIAAA), which provided primary funding for the new research, with additional funding provided by the National Institute on Drug Abuse (NIDA).  “Moreover, it underscores the importance of integrating treatment for alcohol problems into mainstream health care.”
In the United States, estimates of the prevalence of people with HIV who either drink heavily, or who have AUD, range from 8 percent to 42 percent.  Alcohol misuse can increase risky behaviors that increase the likelihood of acquiring HIV or transmitting it to others. Alcohol misuse may also speed the progression of HIV in individuals with HIV infection and make it harder to follow medication regimens.
“Many people with HIV are unaware of, or not seeking treatment for, their alcohol use problems,” said first author E. Jennifer Edelman, M.D., M.H.S., associate professor of medicine at Yale School of Medicine. “In addition, HIV clinicians often do not realize that there are effective medications and counseling that they can easily integrate into their practice for patients with alcohol use problems.”
Noting that previous studies have found that integrating the treatment of opioid use disorder into HIV clinics improves both HIV and substance-related outcomes, the researchers wanted to evaluate whether such a model would similarly benefit people with HIV and AUD.  Treatment for AUD often occurs apart from an individual’s HIV clinical care.  The current study integrates the treatment for AUD with treatment for HIV.
Dr. Edelman and her colleagues conducted a randomized clinical trial in five Veterans Affairs-based HIV clinics with 128 people who had HIV infection and AUD. The researchers investigated integrated stepped alcohol treatment (ISAT) -- an approach that involved consecutive steps of increased AUD treatment intensity if lower intensity treatment did not produce desired results.
People in the ISAT group started their AUD treatment with an on-site addiction psychiatrist, focusing on the use of medications for AUD. If that step did not stop heavy drinking, the next step included the addition of a behavioral intervention conducted on-site to boost motivation to change drinking behavior and teach coping skills for managing high-risk situations. Researchers defined heavy drinking as five drinks or more per day for men and four drinks or more per day for women, on one or more days during the previous 14 days. Patients who continued to engage in heavy drinking were advanced to the final step of referral to specialty addiction treatment — such as intensive outpatient treatment or residential treatment depending on locally available resources.  Patients in the control group received treatment as usual – which included alcohol screening, brief intervention, and referral to specialty addiction treatment at the VA at the discretion of their HIV clinician.
At the end of the six-month study, while both groups reported reduced alcohol intake, the researchers found no differences in drinks per week or HIV outcomes between the ISAT and control groups. Both groups then continued AUD treatment under treatment as usual (control) conditions. At the 12-month follow up, individuals who had initially received ISAT were found to have fared better than individuals who only received treatment as usual.  People in the ISAT group, for example, reported having fewer drinks per drinking day than people in the control group and a greater percentage of days abstinent.  The ISAT group also had a higher percentage of people who reported no heavy drinking days.
“Importantly, we also observed that participants randomized to stepped AUD treatment were more likely to achieve an undetectable HIV viral load,” said Dr. Edelman.  “We believe that with decreased alcohol consumption, participants in the ISAT group were more likely to take their HIV medications consistently, translating into improved HIV viral control.”
In an invited commentary on the new research in The Lancet HIV, co-authors Lorenzo Leggio, M.D., Ph.D., Senior Investigator in the NIH Intramural Research Program at NIAAA and NIDA, and Roberta Agabio, M.D., a psychiatrist at the University of Cagliari in Italy welcomed the new findings as important for the HIV field and beyond.
“Stepped care approaches have been found to be effective for treating a variety of chronic diseases,” said Dr. Leggio.  “These findings are a first indication of their potential value for treating AUD in the context of HIV treatment.  The results warrant further investigation on how to optimize its use among people with HIV, and to explore its integration in other medical care settings. Indeed, the study is a compelling example of the need for trained clinicians across the spectrum of health care to recognize and treat AUD as a medical disorder amenable to a variety of treatment approaches.”

Roberta Agabio and Lorenzo Leggio (2019). HIV and alcohol use disorder: we cannot ignore the elephant in the room. The Lancet HIV.