What: A new study funded by the National Institute on Alcohol Abuse and Alcoholism is among the first to suggest that intestinal fungi may contribute to the development of alcoholic liver disease (ALD). ALD encompasses a broad range of liver diseases, from simple steatosis (fatty liver) to end-stage liver disease, or cirrhosis (liver cell death). Liver cirrhosis is the 12th leading cause of mortality worldwide, with approximately half of those deaths due to alcohol misuse. 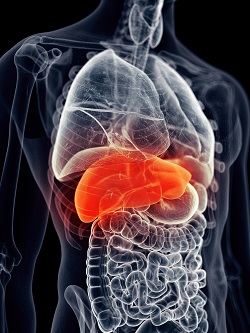 Researchers at the University of California, San Diego and the J. Craig Venter Institute in Rockville, Md., demonstrated that oral antifungal treatment protects mice from alcohol-related liver disease progression. In separate components of the study conducted in humans, the researchers linked intestinal fungi to ALD and to increased risk of death for people with ALD.
ALD has previously been associated with bacterial overgrowth in the intestines, as well as a shift in the types of bacteria found there. Until now, little was known about the role of intestinal fungi in ALD.
In the current study, the researchers found that fungi flourished in the intestines of mice with chronic alcohol exposure. In turn, they noted that fungal overgrowth exacerbated alcohol-induced liver disease. To determine whether preventing intestinal overgrowth protected mice from alcohol-induced liver disease, the researchers treated them with the antifungal agent amphotericin B. Compared to untreated mice, mice with alcohol-related liver disease that received a form of amphotericin B had lower levels of liver injury and fat accumulation.
The researchers also conducted small preliminary studies with humans to examine intestinal fungi of people with alcohol use disorder and various stages of liver disease. They observed an overgrowth of a specific fungal species compared to healthy control subjects, as well as less fungal diversity in individuals with alcohol use disorder and ALD.  They also found that the more prevalent the fungal overgrowth in individuals with ALD, the higher the likelihood of mortality.
Taken together, this research suggests that fungi may play a greater role than previously understood in controlling the diverse array of microbes that live on and inside the human body.
If further study confirms that fungi are involved in the worsening of ALD, it may be possible to slow disease progression by adjusting the balance of fungal species living in the intestine of a person with ALD.