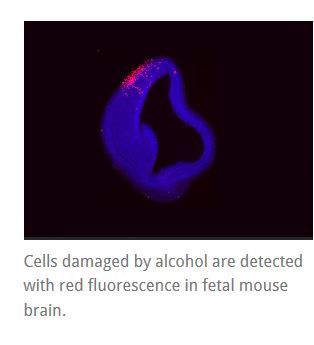 Prenatal exposure to even low doses of alcohol may lead to severe and highly variable deficits in the brain of a fetus, according to a new study conducted in mice. Researchers report that the unpredictable nature of the deficits may be due to inconsistencies in how fetal brain cells activate a protective response to alcohol and other harmful compounds. The new findings may help explain the range of behavioral and learning deficits and other symptoms observed in individuals with fetal alcohol spectrum disorders (FASD) and other congenital brain disorders. The study, supported by the National Institute on Alcohol Abuse and Alcoholism (NIAAA), part of the National Institutes of Health, is now online in Nature Communications.
"Alcohol exposure during embryonic and fetal development can result in FASD and is a leading cause of birth defects," said NIAAA Director George F. Koob, Ph.D. "This study sheds light on the mechanisms underlying alcohol's toxic effects on the fetal brain and may have broader implications for understanding normal fetal brain development, as well as neurodevelopmental disorders unrelated to prenatal alcohol exposure."
FASD is an umbrella term for a range of effects caused by prenatal alcohol exposure. Individuals with FASD may experience growth retardation, facial abnormalities, and organ damage, including to the brain, which can result in a range of neurobiological deficits that contribute to physical, cognitive, behavioral, and social challenges throughout a person's life.
Brain cells use numerous mechanisms to protect against damage from alcohol and other environmental stressors. One mechanism involves the activation of Heat Shock Factor 1 (Hsf1), explained senior author Kazue Hashimoto-Torii, Ph.D., of Children's National Medical Center in Washington, D.C.
"Hsf-1 controls the activity of many genes in the brain, including those that regulate heat shock proteins and cell division," said Dr. Hashimoto-Torii. However, the activation of the Hsf1 pathway varies throughout the brain, possibly linked with cell growth and division. Therefore, the protection provided by the Hsf-1 pathway is not uniform, making some brain areas more vulnerable to the adverse effects of alcohol and other environmental stressors during certain developmental or growth stages. And while Hsf1 is essential for protecting the fetal brain from environmental stress, too much of it can impair brain development. In the current study, an international team led by Dr. Hashimoto-Torii investigated Hsf-1 activation in different areas of the mouse brain to better understand the molecular and cellular events that underlie the neurobiological damage caused by exposure to alcohol and other harmful substances.
The team administered alcohol to pregnant mice at levels that resulted in peak blood alcohol concentrations approximately like those of people who either drink socially or who have severe alcohol use disorder. They then examined fetal brain cell response to alcohol and two other environmental stressors -- hydrogen peroxide and methyl mercury -- all known to induce oxidative stress which may play a role in Hsf1 signaling. The researchers visualized the Hsf1 activation pattern in the developing cerebral cortex, a part of the brain that enables it to process information. During the study, the cerebral cortex was at a stage of accelerated cell division and expansion, which makes it particularly vulnerable to disturbances by alcohol and other stressors in utero. Previous studies suggest that Hsf1 activation at certain levels protects brain cells by increasing their tolerance to harsh conditions in the prenatal environment.
The researchers showed that dividing brain cells, with high levels of Hsf1 activation induced by alcohol exposure, became neurons but exhibited delayed migration. For the brain to develop normally, newly born neurons need to move to specific locations at specific times to form robust connections. Delayed migration can alter the brain's neurocircuitry and cause less efficient communication among brain regions. Even short periods of Hsf1 overactivation caused critical deficiencies in the migration of the cortical neurons.
The researchers note that, in addition to alcohol and other environmental toxins, Hsf1 is activated by other substances and certain maternal biological processes in animal models, potentially amplifying the effects of alcohol exposure on fetal development. They call for more research to advance our understanding of Hsf1 signaling and regulation, and how excessive HSf1 activation changes brain growth and behavior.