NIH researchers identify pathway that may protect against cocaine addiction

A study by researchers at the National Institutes of Health gives insight into changes in the reward circuitry of the brain that may provide resistance against cocaine addiction. Scientists found that strengthening signaling along a neural pathway that runs through the nucleus accumbens – a region of the brain involved in motivation, pleasure, and addiction – can reduce cocaine-seeking behavior in mice.

Research suggests that about 1 in 5 people who use cocaine will become addicted, but it remains unclear why certain people are more vulnerable to drug addiction than others.

"A key step in understanding addiction and advancing treatment is to identify the differences in brain connectivity between subjects that compulsively take cocaine and those who do not,” said Ken Warren, Ph.D., acting director of the National Institute on Alcohol Abuse and Alcoholism (NIAAA). Researchers at NIAAA, part of NIH, conducted the study.

"Until now, most efforts have focused on finding traits associated with vulnerability to develop compulsive cocaine use. However, identifying mechanisms that promote resilience may prove to have more therapeutic value,” said the paper’s senior author, Veronica Alvarez, Ph.D., acting chief of the Section on Neuronal Structure in the NIAAA Laboratory for Integrative Neuroscience.

The study is available on the Nature Neuroscience website ahead of print.

In the study, mice were conditioned to receive an intravenous dose of cocaine each time they poked their nose into a hole in their enclosure. Cocaine was then made unavailable for periods of time during the day. Some of the mice would stop seeking the drug once it was removed while others would obsessively continue to poke the hole in an effort to obtain the drug.

Mice that quickly stopped seeking the drug were found to have stronger connections along the indirect pathway – a neural tract that forms indirect projections into the midbrain and contains cells called medium spiny neurons expressing dopamine D2 receptors (D2-MSNs). A parallel pathway – known as the direct pathway -- forms direct projections into the midbrain neurons and contains medium spiny neurons expressing D1 receptors (D1-MSNs). These two pathways are thought to work together in complementary but sometimes opposing ways to affect behavior.

"We were very surprised by the results of the study because we were originally looking for vulnerability factors for developing compulsive drug use,” said Dr. Alvarez. "Instead, we found changes that only happened in subjects that show a resilience to becoming compulsive drug users. Resilient mice had a strong inhibitory circuit that allowed them to exert better control over their drug intake."

To test this observation, researchers used lasers to activate individual neurons, and found that stimulating D2-MSNs in the nucleus accumbens decreased cocaine seeking in the mice. Blocking D2-MSN signaling with a chemical process increased motivation to obtain cocaine.

"This research advances our understanding of how the recruitment, activation and the interaction among brain circuits can either restrain or increase motivation to take drugs,” said David Shurtleff, Ph.D. acting deputy director of the National Institute on Drug Abuse.

Previous studies have shown that people with lower levels of dopamine D2 receptors in the striatum, a brain region associated with reward and working memory, are more likely to develop compulsive behaviors toward stimulant drugs.

Dopamine is a key neurotransmitter involved in reward-based learning and addiction. Cocaine disrupts communication between neurons at the synapse, the small junction between nerve cells, by blocking the reabsorption of dopamine into the transmitting neuron. As a result, dopamine continues to stimulate the receiving neuron, causing feelings of alertness and euphoria. 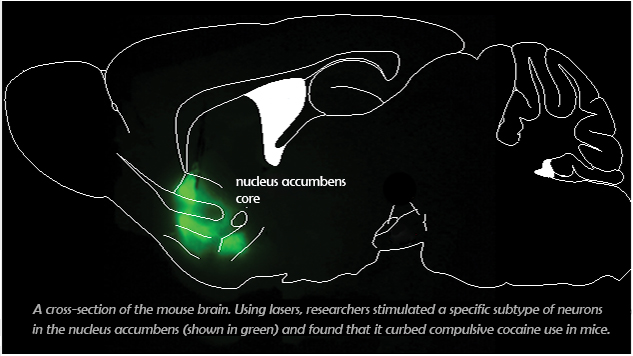