NIH study reveals many Americans at risk for alcohol-medication interactions

Nearly 42 percent of U.S. adults who drink also report using medications known to interact with alcohol, based on a study from the National Institutes of Health released today. Among those over 65 years of age who drink alcohol, nearly 78 percent report using alcohol-interactive medications.

Such medications are widely used, prescribed for common conditions such as depression, diabetes and high blood pressure.

The research is among the first to estimate the proportion of adult drinkers in the United States who may be mixing alcohol-interactive medications with alcohol. The resulting health effects can range from mild (nausea, headaches, loss of coordination) to severe (internal bleeding, heart problems, difficulty breathing).

“Combining alcohol with medications often carries the potential for serious health risks,” said Dr. George Koob, director of the National Institute on Alcohol Abuse and Alcoholism (NIAAA), part of NIH. “Based on this study, many individuals may be mixing alcohol with interactive medications and they should be aware of the possible harms.”

The study, led by Dr. Rosalind Breslow, Ph.D., appears in the February 2015 issue of Alcoholism: Clinical and Experimental Research, now online at the journal’s website. 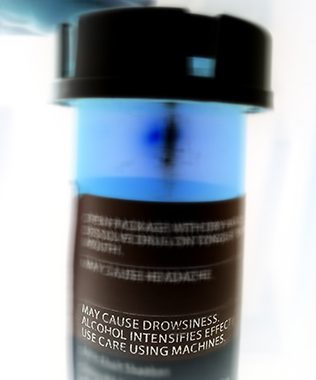 “Our findings show that a substantial percentage of people who drink regularly, particularly older adults, could be at risk of harmful alcohol and medication interactions,” said Dr. Breslow, an epidemiologist in NIAAA's Division of Epidemiology and Prevention Research.  “We suggest that people talk to their doctor or pharmacist about whether they should avoid alcohol while taking their prescribed medications.”

Older adults are at particular risk of experiencing alcohol-medication interactions. Not only are they more likely to be taking medications in general, but certain alcohol-interactive medications, such as diazepam (Valium), are metabolized more slowly as one ages, creating a larger window for potential interactions.

The researchers analyzed data from more than 26,000 adults ages 20 and older who participated in the National Health and Nutrition Examination Survey (1999-2010). The survey asks participants about alcohol use in the past year and prescription drug use in the past month.

Dr. Breslow notes that the results of the study indicate potential (rather than actual) rates, because the researchers could not confirm whether drinking and medication use overlapped based on the available data. However, it is likely that those who drink regularly and take medication regularly are doing so in a similar time frame.

Based on recent estimates, about 71 percent of U.S. adults drink alcohol.

For more on alcohol-medication interactions, see this NIAAA fact sheet.