NIAAA Spectrum: Animal Study Suggests Alcohol Use Before Pregnancy May Increase Vulnerability of Offspring to Stress in Adulthood

The effects of alcohol use during pregnancy on an unborn child are well known. However, a recent NIAAA-funded study in rats has shown that a mother’s alcohol use before conception also could have negative effects on her child’s health and response to stress during adulthood.
To study the effects of preconception alcohol use, the research team, led by Dipak Sarkar, Ph.D., at Rutgers University, gave female rats 4 weeks of access to a diet containing 6.7 percent alcohol, which raised their blood alcohol levels similar to that of binge drinking in humans. Alcohol was then removed from the rats’ diet, and they were bred 3 weeks later. After the rats’ offspring reached adulthood, the researchers used standard laboratory techniques to evaluate their response to stress, anxiety-like behaviors, changes in levels of stress regulatory genes and protein hormones, as well as epigenetic changes—chemical modifications to DNA that occur in the absence of changes in sequence and can alter gene function.
The team found that offspring of rats that were exposed to alcohol before conception had increased levels of stress hormones in their blood in response to an immune challenge and changes in the expression and epigenetic profiles of genes that play a role in regulating stress responses in their brains. However, the researchers observed changes in anxiety-like behaviors only in the male offspring.
Previous research has indicated that epigenetic mutations may be passed from parent to child and also that epigenetic mutations may play a role in the expression of anxiety-linked behaviors and response to stress. Alcohol problems are known to run in families, and increased alcohol consumption in humans has been associated with increased anxiety.
Taken together, these findings suggest that epigenetic changes in the mother as a result of alcohol misuse before conception may be passed on to her offspring. These changes could have lifelong effects on a child’s response to stress.
Reference:
Jabbar, S.; Chastain, L.G.; Gangisetty, O.; Cabrera, M.A.; Sochacki, K.; and Sarkar, D.K. Preconception alcohol increases offspring vulnerability to stress. Neuropsychopharmacology 41(11):2782–2793, 2016. PMID: 27296153 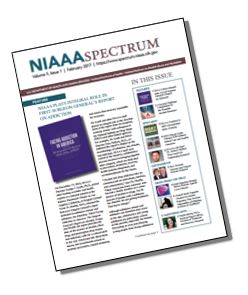