Research suggests that chronic alcohol use may increase the risk for post-traumatic stress disorder (PTSD) by altering the brain’s ability to recover from a traumatic experience. While alcoholism is often linked with PTSD, few studies have explored how chronic drinking may subsequently make a person more prone to such anxiety disorders. In a new study, researchers at the NIAAA observed that chronic alcohol exposure altered neurons in the medial prefrontal cortex (mPFC) of mice, making them slower to suppress a conditioned fear response.

“Excessive drinking has been shown to increase the likelihood that someone will experience a traumatic event, including car accidents and episodes of domestic violence. The findings from this study suggest that chronic alcohol use may also increase a person’s risk for an anxiety disorder such as PTSD after experiencing such an incident,” said lead author Andrew Holmes, Ph.D., of the NIAAA Laboratory of Behavioral and Genomic Neuroscience.

To study the potential relationship between alcoholism and PTSD, researchers examined how quickly mice learned to inhibit a fear response after a traumatic event, also known as “fear extinction.” Mice used in the study were given several rounds of vaporized alcohol to mimic a pattern of heavy use typical of alcoholism. Two days later, they were conditioned to associate a specific tone with a shock to the foot. Researchers studied how quickly the mice stopped displaying fear (indicated by freezing) when the tone was played without a resulting shock.

Mice that had undergone chronic alcohol exposure took longer to lose their fear of the tone, freezing more frequently than other mice after the second round of extinction testing. They also had poorer retention, freezing more often when the testing was done again after time had elapsed. Examining the brains of the alcohol-exposed mice revealed changes to neurons in the medial prefrontal cortex, with certain neurons displaying longer dendrites (the branching projections that carry neural signals to the cell body). Testing in live mice showed that neural functioning related to fear extinction was also affected.

These results indicate that chronic drinking may impair fear extinction and alter neural circuits that mediate recovery from trauma, increasing the risk for PTSD.  The findings were published online on Sept. 2, 2012 by the journal Nature Neuroscience. 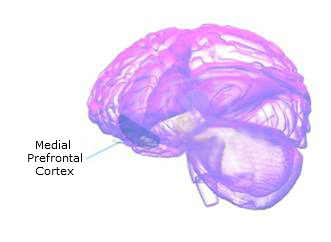 Chronic drinking rewires brain circuits that are involved in recovery from traumatic events. Researchers observed changes to neurons in the medial prefrontal cortex of the brain, suggesting that alcoholism could increase the risk for post-traumatic stress disorder and related conditions.