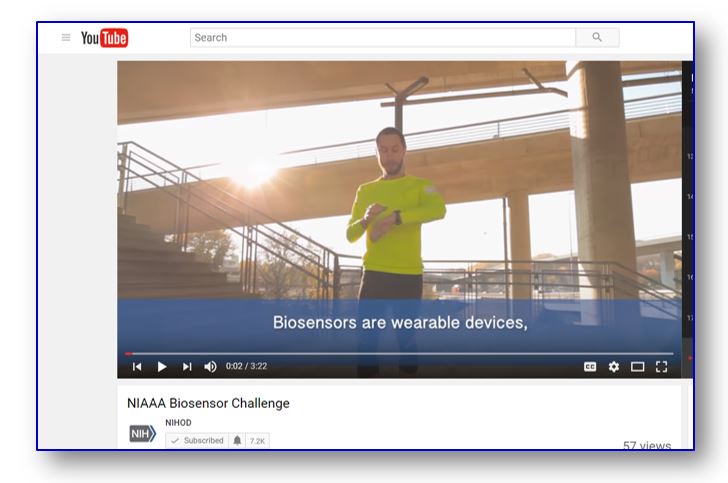 The National Institute on Alcohol Abuse and Alcoholism (NIAAA) is the lead Federal agency responsible for research on the causes, consequences, prevention, and treatment of alcohol-related problems. The Institute funds more than 90 percent of alcohol-related research in the United States. As such, NIAAA-supported research aims to be cutting-edge and multi-disciplinary in scope, capitalizing on the best science from a range of disciplines to enhance research and increase the momentum of discoveries to benefit individual and public health.
To that end, NIAAA sponsored the first Wearable Alcohol Biosensor Challenge a year ago, culminating in a 1st Prize of $200,000 being awarded to BACTrack Inc., and a 2nd Prize of $100,000 to Milo Inc., for their successful production of working prototypes that measure blood alcohol content. The prototypes use fuel cell technology to measure and track blood alcohol concentration (BAC).  Since the previous challenge, NIAAA has become aware of other technologies that also offer promise and we eagerly anticipate entries that use innovative approaches to measure blood alcohol content.
Building upon the success of last year’s competition, NIAAA is challenging innovators to capitalize on recent advances in technology to create a working prototype that is at once non-invasive, unobtrusive, accurate, and marketable. It is the intent of the challenge to not only give researchers more tools for understanding the effects of alcohol, but also to put such valuable data in the hands of the consumer.
There are many settings in which a wearable alcohol biosensor would be of great benefit to treatment professionals, clinicians, researchers, and individuals. Imagine having a choice of multiple wearables, readily available in the market, that could provide real-time data on blood alcohol levels.

To produce a prototype of a sleek, unobtrusive wearable capable of monitoring blood alcohol non-invasively. Such a device would significantly advance current alcohol monitoring capabilities. Highest priority will be given to devices that use non-invasive technologies to measure alcohol concentration in the blood, other bodily fluids, or tissues, as opposed to detection of alcohol exuded through the skin in sweat or vapor. This challenge seeks innovative solutions in non-invasive wearable forms that quantify in vivo alcohol through the invention, or the adaptation and miniaturization, of technologies such as (but not limited to) spectroscopy or wave technology. Innovation is encouraged!
NIAAA believes that development of biosensors that more accurately detect alcohol concentration in the blood or interstitial fluid in real-time will be of value in research and treatment settings, for individual use, and for other applications. The current challenge seeks the discovery, development, and innovation of technologies miniaturized for wearable alcohol detection in the blood or interstitial fluid.
Criteria
The device should be able to quantitate blood alcohol level, interpret the data, and store or transmit data to a smartphone or other device by wireless transmission. NIAAA is seeking a solution that closely approximates real time-monitoring and data collection, eliminating as much of the biological and device-related delays as possible through innovative, validated, and verifiable techniques. While achievable limits of detection remain to be demonstrated, devices capable of detecting 0.02% BAC would be of value to NIAAA.
Data storage and transmission must be completely secure in order to protect the privacy of the individual. The device should have the ability to verify standardization at regular intervals and to indicate loss of functionality. The power source should be dependable and rechargeable. The device can be removable and a form of subject identification would be an added benefit.
Prototypes relying on an additional form factor or platform will be required to submit the entire package for testing, e.g. smart phone or software.
This is a reduction to practice challenge that requires written documentation and a working prototype of the submitted device. Judging will include evaluation of the technical approach, as well as testing of the prototypes on human subjects by NIAAA. Upon receipt of the written entries, an address will be provided for the shipment of the prototypes, with all accessories needed for functionality, to NIAAA. Prototypes will be returned to the entrants after the judging process.
NIAAA is open to a range of design forms which can accomplish the above tasks.
NIAAA is offering a first place award of $200,000 and a second place award of $100,000.
Visit https://www.challenge.gov/challenge/wearable-alcohol-biosensor/ for more information.
Further information can be found on the main NIAAA website, by contacting NIAAAChallengePrize@mail.nih.gov, or by contacting