The number of American adults who abuse alcohol or are alcohol dependent rose from 13.8 million (7.41 percent) in 1991-1992 to 17.6 million (8.46 percent) in 2001-2002, according to results from the 2001-2002 National Epidemiologic Survey on Alcohol and Related Conditions (NESARC), a study directed by the National Institute on Alcohol Abuse and Alcoholism (NIAAA).

The NESARC study -- a representative survey of the U.S. civilian noninstitutionalized population aged 18 years and older - showed that the rate of alcohol abuse increased from 3.03 to 4.65 percent across the decade while the rate of alcohol dependence, commonly known as alcoholism, declined from 4.38 to 3.81 percent. The study appears in the current issue of Drug and Alcohol Dependence (Volume 74, Number 3, pages 223-234).

NESARC survey questions are based on diagnostic criteria for alcohol abuse and alcohol dependence contained in the American Psychiatric Association's Diagnostic and Statistical Manual of Mental Disorders-Fourth Edition (DSM-IV). Field work for the NESARC was performed by the United States Census Bureau, which administered face to face interviews with 43,093 respondents. The combined household and individual response rate was 81 percent.  Like its predecessor, the 1991-1992 National Longitudinal Alcohol Epidemiologic Survey (NLAES), the NESARC assessed the prevalence of alcohol disorders during the year prior to the survey. Since DSM diagnostic criteria remained unchanged across the decade, the NIAAA research team, led by Bridget Grant, Ph.D., Ph.D., Chief, Laboratory of Epidemiology and Biometry, Division of Intramural Clinical and Biological Research, was able to assess changes in the prevalence of alcohol disorders across a 10-year period.

"Change or stability in the prevalence of alcohol disorders has important public health implications for researchers, policy makers, and the public," said Elias Zerhouni, M.D., Director, National Institutes of Health.

"The NESARC report reinforces the need for ongoing research to define genetic and environmental factors that contribute to alcohol abuse and dependence, as well as current NIAAA initiatives for the early identification of at-risk drinkers and the application of research-based interventions in vulnerable populations, especially underage drinkers," according to Ting-Kai Li, M.D., Director, National Institute on Alcohol Abuse and Alcoholism. "The fact that alcohol disorder rates are highest among young adults underscores the need for concerted research on drinking patterns that initiate in adolescence."

Overall, the NESARC data show that rates of alcohol abuse and dependence in 2001-2002 were substantially higher in men than women and among younger study participants aged 18-29 and 30-44 years. Alcohol abuse is more prevalent among whites than among Hispanics, Blacks, and Asians. Alcohol dependence is more prevalent among Native Americans, Hispanics, and whites than among Asians.

The availability of data from both 1991-1992 and 2001-2002 allowed the researchers to identify constant as well as emerging risk groups with greater clarity than in the past. As in 1991-1992, whites, Native Americans, and men remain at high risk for alcohol abuse. By 2001-2002, rates in other subgroups had climbed to approach those of stable high-risk groups. Across the decade, the prevalence of alcohol abuse increased among all race-ethnic subgroups except Native Americans and Asians. The increases were significant for both genders of whites, Blacks, and Hispanics. Among age groups, Black and Hispanic men and Asian women aged 18-29 years showed significant increases.

"That rates of dependence overall decreased is not surprising in light of other surveys that indicate a decline in heavy drinking," Dr. Grant said. "That alcohol abuse seems to be increasing presents intriguing questions. What is clear is that no single environmental cause can explain the increase. Further research is an important public health priority."

Full text of the article is available at www.sciencedirect.com/ after 12:00 AM June 10. For an interview with Dr. Grant, please call the NIAAA Press Office.

Alcohol abuse is a condition that is characterized by failure to fulfill major role obligations at work, school, or home, interpersonal social and legal problems, and/or drinking in hazardous situations.

Alcohol dependence, also known as alcoholism, is a condition characterized by impaired control over drinking, compulsive drinking, preoccupation with drinking, tolerance to alcohol and/or withdrawal symptoms. 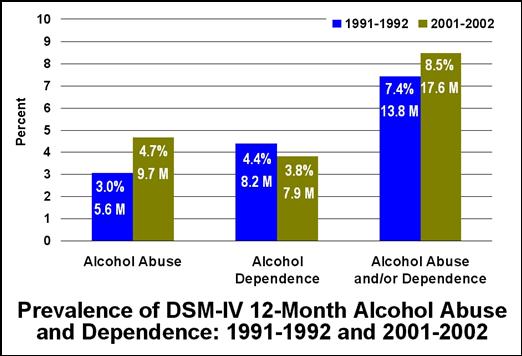