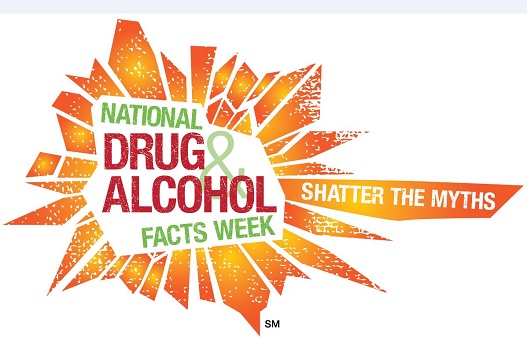 “We are delighted that we can now fully focus on the scientific facts about alcohol as well as other drugs that are popular among teens,” said NIDA Director Nora D. Volkow, M.D. “This partnership will allow teachers and other organizers to create events that are tailor-made for the specific issues in their communities by accessing links to the needed resources for drugs and alcohol all in one place.”

“Just as NIAAA and NIDA scientists routinely collaborate on many issues of common concern, it’s vital that we join together in this effort to ensure that young people get the facts about how alcohol and drugs can affect them, both in the short-term and over their lifetime,” said NIAAA Director George F. Koob, Ph.D.

The week-long observance was launched in 2010 to counteract the myths about drugs and alcohol that teens often hear from the Internet, TV, movies, music, or friends. Since its inception, the number of community-based events has grown dramatically, with more than 1,500 held last January throughout all 50 states and several international sites. Events link teens with scientists and other experts, creating a safe place for teens to ask questions about drug and alcohol use, without judgment or lectures. Events can be sponsored by a variety of organizations, including schools, community groups, sports clubs, and hospitals. Event holders are provided with an online toolkit that advises teens and their adult coordinators how to create an event, publicize it, find an expert, and obtain scientific information on drugs.

Ideas for events, as well as success stories from previous years, are highlighted on the National Drug and Alcohol Facts Week Web portal that resides within the popular NIDA for Teens site. Special resources on alcohol have been added this year in recognition of the new partnership. The site also features a new tobacco toolkit for event holders who want to focus on the scientific facts about smoking.

Event holders who register online will receive free booklets with science-based facts about drugs and alcohol, including one of NIDA’s most in-demand teen publications, Drugs: Shatter the Myths. Also this year, NIDA and NIAAA offer three interactive tools that can be projected on large screens at events or used with mobile devices:

National Drug and Alcohol Facts Week is again supported by many federal agencies, including the White House Office of National Drug Control Policy (ONDCP); the Office of Safe and Healthy Students in the U.S. Department of Education; the Substance Abuse and Mental Health Services Administration; and the Drug Enforcement Administration. Each agency will post National Drug and Alcohol Facts Week information on its website and encourage the development of special events linking experts to teens.

“We are not powerless when it comes to drug and alcohol use among young people. We know that preventing substance use before it begins is the most cost-effective approach to reduce substance use and its consequences,” said ONDCP Director Michael Botticelli. “By raising awareness and educating young people and their families, we can help reduce drug use and the number of people affected by substance use disorders.”

Also during National Drug and Alcohol Facts Week, NIDA and NIAAA scientists will hold their annual Web chat with teens around the country. National Drugs and Alcohol Chat Day will be held Jan. 26, 2016 from 8 a.m. to 6 p.m. Eastern time. Further details on the popular annual chat, including registration information and transcripts from previous years, can be found at https://teens.drugabuse.gov/national-drug-facts-week/chat-with-scientists.

For questions about events, or to receive an e-newsletter following NDAFW planning, organizations can e-mail NIDA at drugfacts@nida.nih.gov.

To join the conversation on social media, follow @NIDAnews and @NIAAAnews and look for the hashtag #NDAFW.

About the National Institute on Drug Abuse (NIDA): The National Institute on Drug Abuse (NIDA) is a component of the National Institutes of Health, U.S. Department of Health and Human Services. NIDA supports most of the world’s research on the health aspects of drug abuse and addiction. The Institute carries out a large variety of programs to inform policy and improve practice. Fact sheets on the health effects of drugs of abuse and information on NIDA research and other activities can be found at https://www.drugabuse.gov, which is now compatible with your smartphone, iPad or tablet. To order publications in English or Spanish, call NIDA’s DrugPubs research dissemination center at 1-877-NIDA-NIH or 240-645-0228 (TDD) or email requests to drugpubs@nida.nih.gov. Online ordering is available at https://drugpubs.drugabuse.gov. NIDA’s media guide can be found at https://drugabuse.gov/mediaguide/, and its easy-to-read website can be found at https://www.easyread.drugabuse.gov.