Muscle weakness from long-term alcoholism may stem from an inability of mitochondria, the powerhouses of cells, to self-repair, according to a study funded by the National Institutes of Health.

In research conducted with rats, scientists found evidence that chronic heavy alcohol use affects a gene involved in mitochondrial repair and muscle regeneration.

“The finding gives insight into why chronic heavy drinking often saps muscle strength and it could also lead to new targets for medication development,” said Dr. George Koob, director of the National Institute on Alcohol Abuse and Alcoholism, the NIH institute that funded the study.

The study is available online in the April issue of the Journal of Cell Biology. It was led by Dr. Gyorgy Hajnoczky, M.D., Ph.D., director of Thomas Jefferson University’s MitoCare Center, Philadelphia, and professor in the Department of Pathology, Anatomy and Cell Biology. 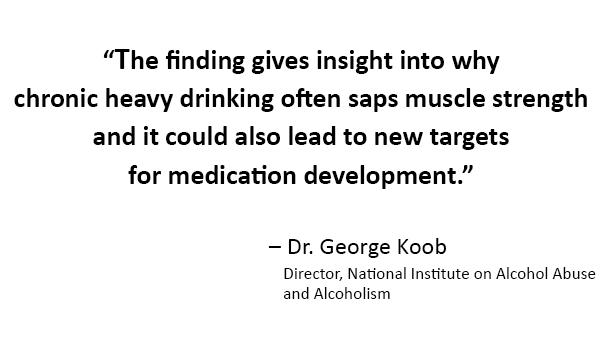 Mitochondria are cellular structures that generate most of the energy needed by cells. Skeletal muscle constantly relies on mitochondria for power. When mitochondria become damaged, they can repair themselves through a process called mitochondrial fusion -- joining with other mitochondria and exchanging material such as DNA.

Although well known in many other tissues, the current study is the first to show that mitochondria in skeletal muscle are capable of undergoing fusion as a repair mechanism. It had been thought that this type of mitochondrial self-repair was unlikely in the packed fibers of the skeletal muscle cells, as mitochondria have little opportunity to interact in the narrow space between the thread-like structures called myofilaments that make up muscle.

By tagging mitochondria in the skeletal tissue of rats with different colors, the researchers were able to observe the process in action and confirm that mitochondrial fusion occurs in muscle cells. They also identified a key protein in the process, mitofusin 1 (Mfn1) fusion proteins, and showed that chronic alcohol use interferes with the process.