A new study led by scientists at the National Institute on Alcohol Abuse and Alcoholism (NIAAA), part of the National Institutes of Health, demonstrates that aldosterone, a hormone produced in the adrenal glands, may contribute to alcohol use disorder (AUD). The novel research, conducted in collaboration with a team of investigators in the United States and Europe, appears in the journal Molecular Psychiatry.

“This intriguing work – conducted in humans as well as two other species – provides a compelling example of how basic and preclinical research is translated into studies with direct relevance to humans,” said NIAAA Director George F. Koob, Ph.D., a co-author of the study. “It also demonstrates how interactions between the brain and the endocrine system may serve as potential targets for the development of new AUD medications.”

Aldosterone helps regulate electrolyte and fluid balance by binding to mineralocorticoid receptors (MRs), which are located throughout the body. In the brain, MRs are mainly located in the amygdala and the prefrontal cortex -- two key brain areas involved in the development and maintenance of AUD. In AUD, amygdala dysfunction heightens activation of brain stress systems resulting in anxiety and other negative emotions, while disruption of the prefrontal cortex impairs executive control systems involved in the ability to make decisions and regulate one’s actions, emotions, and impulses.

“Previous studies, including a pilot clinical study that we published in 2008, illustrate the possible role for aldosterone in AUD,” said senior author Lorenzo Leggio, M.D., Ph.D., chief of the Section on Clinical Psychoneuroendocrinology and Neuropsychopharmacology, a NIAAA intramural laboratory jointly funded with the National Institute on Drug Abuse, also part of NIH. “Our overall hypothesis has been that aldosterone may play a role in AUD via its MR receptor and that this neuroendocrine pathway may be particularly important in anxiety, stress and stress-induced alcohol drinking.”

The new report describes three separate studies, conducted with non-human primates, rats, and humans, that investigated the potential contribution of the aldosterone/MR pathway to AUD.

In a study conducted with non-human primates, the researchers found that animals which self-administered alcohol every day for six to 12 months had significantly higher blood aldosterone concentrations, compared with the concentrations measured prior to alcohol administration. In fact, the aldosterone increase observed at six months remained high after 12 months of continued drinking, and did not increase further, suggesting that blood aldosterone concentrations become regulated at a new set-point under daily alcohol consumption. Furthermore, the researchers found that in the amygdala, lower MR gene expression – the process of making functional MR protein from the MR gene – was associated with increased alcohol drinking in the animals.  Similar results were not found in the prefrontal cortex. 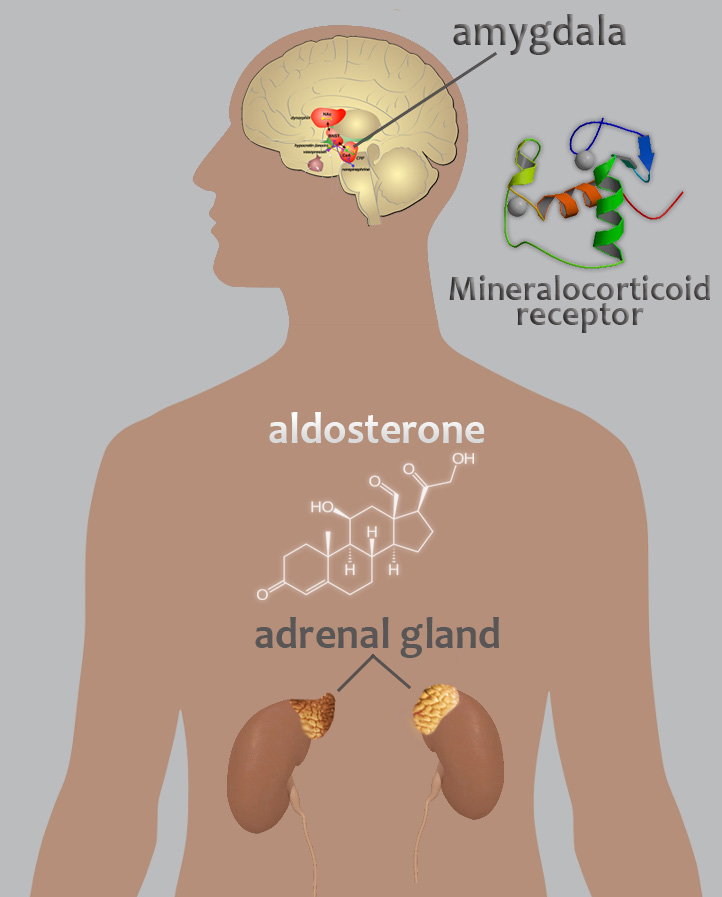 “The amygdala is a key regulator of emotion and stress and its adaptation to aldosterone signaling due to chronic alcohol drinking illustrates fundamental adaptations across organ systems that underlie the pathological state associated with AUD,” said Kathleen Grant, Ph.D., study co-author and head of the Division of Neuroscience, Oregon National Primate Research Center at Oregon Health & Science University, Portland.

Taken together, the researchers conclude that the findings provide support across three different species for a relationship between alcohol misuse, AUD, and specific changes in the aldosterone/MR pathway marked by increased circulating aldosterone and decreased mineralocorticoid receptor gene expression in the amygdala.

“Future studies should further investigate the mechanisms underlying the relationship between alcohol drinking and the aldosterone/MR pathway and whether this pathway might be targeted for the development of new pharmacotherapies for AUD,” said Dr. Leggio.

Image Caption: Aldosterone, a hormone produced in the adrenal glands, may contribute to alcohol use disorder (AUD) by binding to mineralocorticoid receptors in the brain, particularly in the amygdala – a key brain area involved in the development and maintenance of AUD. Credit: NIAAA