Assessing the patterns of energy use and neuronal activity simultaneously in the human brain improves our understanding of how alcohol affects the brain, according to new research by scientists at the National Institutes of Health. The new approach for characterizing brain energetic patterns could also be useful for studying other neuropsychiatric diseases. A report of the findings is now online in Nature Communications.
“The brain uses a lot of energy compared to other body organs, and the association between brain activity and energy utilization is an important marker of brain health,” said George F. Koob, Ph.D., director of the National Institute on Alcohol Abuse and Alcoholism (NIAAA), part of NIH, which funded the study. “This study introduces a new way of characterizing how brain activity is related to its consumption of glucose, which could be very useful in understanding how the brain uses energy in health and disease.”
The research was led by Dr. Ehsan Shokri-Kojori and Dr. Nora D. Volkow of the NIAAA Laboratory of Neuroimaging.  Dr. Volkow is also the director of the National Institute on Drug Abuse at NIH.  In previous studies they and their colleagues have shown that alcohol significantly affects brain glucose metabolism, a measure of energy use, as well as regional brain activity, which is assessed through changes in blood oxygenation.
“The findings from this study highlight the relevance of energetics for ensuring normal brain function and reveal how it is disrupted by excessive alcohol consumption,” says Dr. Volkow.
In their new study, the researchers combined human brain imaging techniques for measuring glucose metabolism and neuronal activity to derive new measures, which they termed power and cost.
“We measured power by observing to what extent brain regions are active and use energy,” explained Shokri-Kojori. “We measured cost of brain regions by observing to what extent their energy use exceeds their underlying activity.”
In a group of healthy volunteers, the researchers showed that different brain regions that serve distinct functions have notably different power and different cost. They then investigated the effects of alcohol on these new measures by assessing a group of people that included light drinkers and heavy drinkers and found that both acute and chronic exposure to alcohol affected power and cost of brain regions. 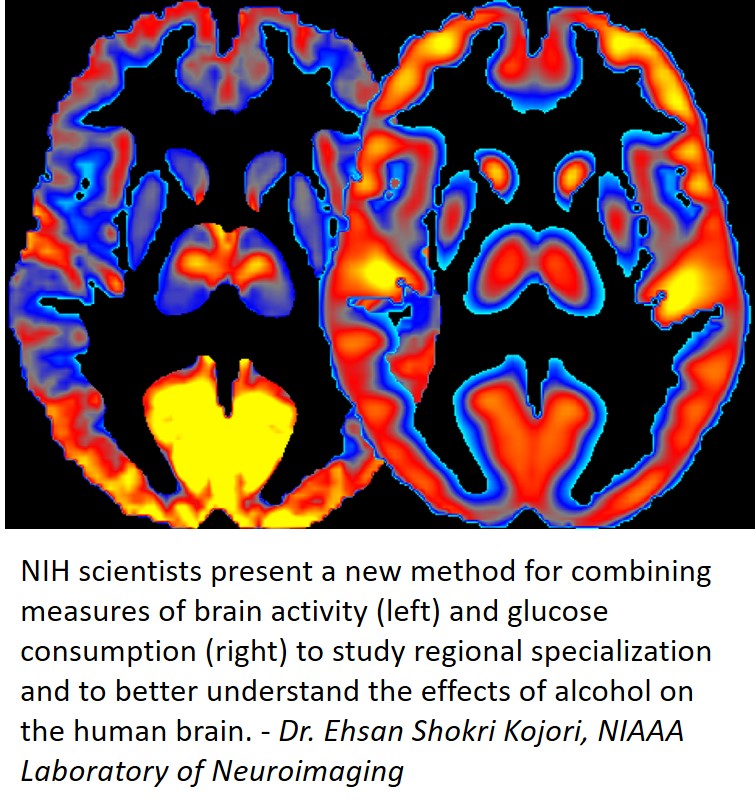 “In heavy drinkers, we saw less regional power for example in the thalamus, the sensory gateway, and frontal cortex of the brain, which is important for decision making,” said Dr. Shokri-Kojori. “These decreases in power were interpreted to reflect toxic effects of long-term exposure to alcohol on the brain cells.”
The researchers also found a decrease in power during acute alcohol exposure in the visual regions, which was related to disruption of visual processing. At the same time, visual regions had the most significant decreases in cost of activity during alcohol intoxication, which is consistent with the reliance of these regions on alternative energy sources such as acetate, a byproduct of alcohol metabolism.
They conclude that despite widespread decreases in glucose metabolism in heavy drinkers compared to light drinkers, heavy drinking shifts the brain toward less efficient energetic states. Future studies are needed to investigate the mechanisms contributing to this relative inefficiency.
“Studying energetic signatures of brain regions in different neuropsychiatric diseases is an important future direction, as the measures of power and cost may provide new multimodal biomarkers for such disorders,” says Dr. Shokri-Kojori.
Citation:
Shokri-Kojori E, Tomasi D, Alipanahi B, Wiers CE, Wang GJ, Volkow ND (2019). Correspondence between cerebral glucose metabolism and BOLD reveals relative power and cost in human brain. Nat Commun. 10(1):690.