A single screening question about drinking frequency in the past year could help doctors identify adolescents at risk for alcohol problems, according to a new study funded by the National Institute on Alcohol Abuse and Alcoholism (NIAAA), part of the National Institutes of Health. Conducted by researchers at the University of Pittsburgh, who collaborated with a network of rural primary care practitioners, the study also supports the use of the age-based screening thresholds put forward in NIAAA’s Alcohol Screening and Brief Intervention for Youth: A Practitioner’s Guide.

“Primary care physicians are encouraged to screen adolescents for alcohol problems, yet many do not, citing time constraints and other issues,” said NIAAA Director George Koob, PhD.  “This study demonstrates that simple screening tools such as those in NIAAA’s Youth Guide are efficient and effective.”

Researchers led by Duncan B. Clark, M.D., Ph.D., Professor of Psychiatry at the University of Pittsburgh Medical Center, asked nearly 1,200 young people ages 12 through 20 at primary care clinics in rural Pennsylvania about their alcohol use and screened them for alcohol use disorder (AUD)[1] using a computer-based questionnaire. They found that 10 percent of rural youth over age 14 met the diagnostic criteria for AUD in the past year, as specified in the Diagnostic and Statistical Manual of Mental Disorders, 5th Edition (DSM-5). The new findings are now online in The Journal of Pediatrics.[2] 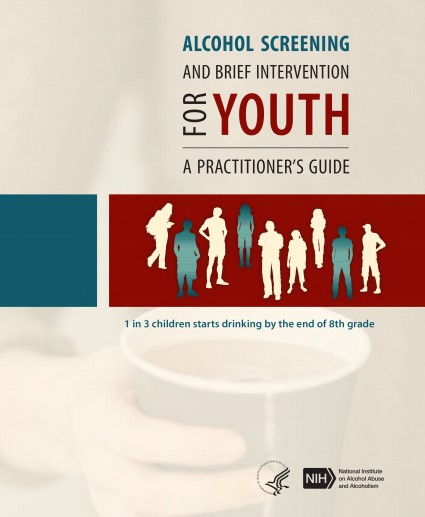 Adolescents between 12 and 17 years of age who reported drinking at least one standard drink on three or more days in the past year were most at risk for alcohol problems. Among those who drank at this level, 44 percent were found to have AUD. Screening for AUD based on the 3-day guideline demonstrated 91 percent sensitivity — indicating that a youth with AUD was likely to be detected by the screen — and 93 percent specificity — meaning those without AUD were likely have a negative result. A negative screen (fewer than three drinking days in the past year) effectively ruled out AUD, with 99 percent not having the disorder.

For adolescents ages 18-20, the researchers found that the best screen for alcohol problems was to ask whether individuals had engaged in 12 or more drinking days (i.e., a day in which at least one standard drink is consumed) in the past year. Thirty-one percent of those who reported drinking at this level had AUD.

“This finding confirms that a single question can be an effective screen for AUD,” said Dr. Clark. “We found that this information could be readily collected through our tablet computer system in busy rural clinic settings.”

The researchers note that, as national studies document higher rates of alcohol use among rural youth, identifying problem drinking is of particular importance for primary care providers in rural settings. They conclude that an alcohol use frequency screen followed by a diagnostic evaluation for those who screen positive would be “a simple, brief, and cost-effective clinical assessment procedure.”

The NIAAA Alcohol Screening and Brief Intervention for Youth: A Practitioner’s Guide is available at http://niaaa.nih.gov/publications/clinical-guides-and-manuals/alcohol-screening-and-brief-intervention-youth