New preclinical research reported in animal models shows that exposure to compounds found in marijuana called cannabinoids (CBs), which includes cannabidiol (CBD) and tetrahydrocannabinol (THC), during early pregnancy can cause malformations in the developing embryo. The research also demonstrated that co-exposure to CBs and alcohol increased the likelihood of birth defects involving the face and brain. The study, funded by the National Institute on Alcohol Abuse and Alcoholism (NIAAA), part of the National Institutes of Health, was published in Scientific Reports. 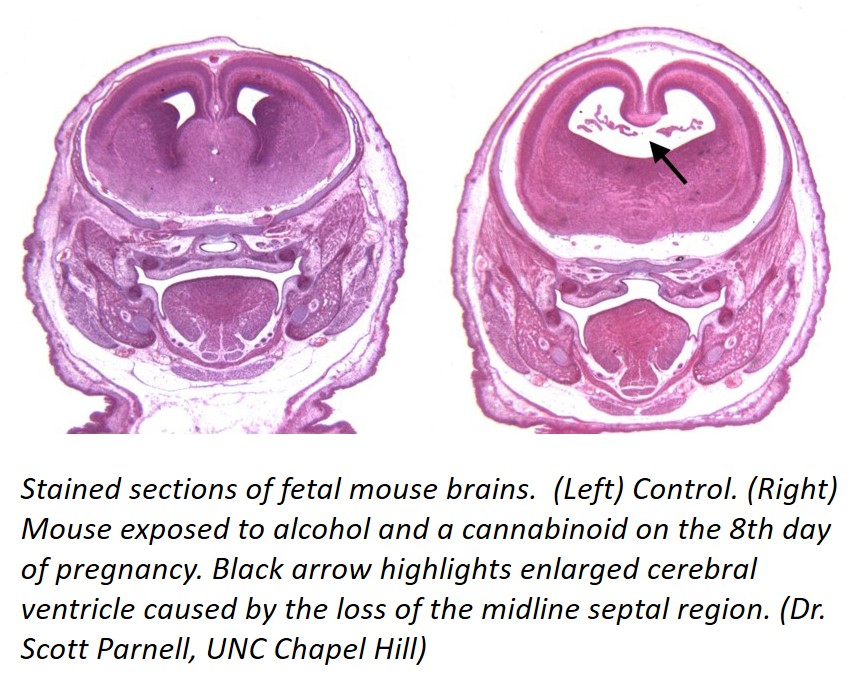 “Prenatal alcohol exposure is a leading preventable cause of birth defects and neurodevelopmental abnormalities in the United States,” said NIAAA Director, George F. Koob, Ph.D. “Since marijuana and alcohol are frequently used simultaneously, the combined effects of cannabinoids and alcohol are worrisome as well as the dangers of either substance alone.”
The detrimental effects of prenatal alcohol exposure on human development are well known and include an array of lifelong physical, cognitive, and behavioral problems collectively called fetal alcohol spectrum disorders (FASD). Alcohol can disrupt fetal development at any stage during pregnancy, even the earliest stages before a woman knows she is pregnant. The effects of marijuana exposure during pregnancy and the combined effect of alcohol and marijuana are less known.
In the study, scientists led by Scott Parnell, Ph.D., at the Bowles Center for Alcohol Studies at the University of North Carolina in Chapel Hill, administered a variety of CBs alone and in combination with alcohol in varying amounts to mice on day eight of pregnancy, which is similar to the third and fourth weeks of pregnancy in humans. The CBD amounts administered were within what is considered a therapeutic range for several medical conditions in humans. The THC concentration administered was similar to levels reached by a person smoking marijuana.
The researchers found that one-time exposure to CBD and THC caused eye, brain, and facial malformations similar to those caused by prenatal alcohol exposure alone. The researchers also found that when mice were given both CBs and alcohol, the likelihood of these birth defects more than doubled. They confirmed this finding in a zebrafish model.
Further investigation by Parnell’s team revealed clues about the mechanisms by which alcohol and CBs interact at the cellular level. They found that alcohol and CBs converge on the Sonic Hedgehog pathway to inhibit signaling between molecules in cells that control growth and development in the embryo. The Sonic Hedgehog pathway plays a key role in the development of animals and humans.
“Our finding that simultaneous exposure to alcohol and CBs induces the highest rate of birth defects, even at low doses of these substances emphasizes the need for more research to better understand the effects of alcohol and CBs on the developing embryo,” said Parnell.
Reference: EW Fish, LB Murdaugh, C Zhang, KE Boschen, O Boa-Amponsem, HN Mendoza-Romero, M Tarpley, L Chdid, S Mukhopadhyay, GJ Cole, KP Williams, and SE Parnell. Cannabinoids Exacerbate Alcohol Teratogenesis by a CB1-Hedgehog Interaction. Sci Rep 9, 16057 (2019) doi:10.1038/s41598-019-52336-w.
This news release describes a basic research finding. Basic research increases our understanding of human behavior and biology, which is foundational to advancing new and better ways to prevent, diagnose, and treat disease. Science is an unpredictable and incremental process — each research advance builds on past discoveries, often in unexpected ways. Most clinical advances would not be possible without the knowledge of fundamental basic research.