You’ve probably seen this warning on medicines you’ve taken. The danger is real. Mixing alcohol with certain medications can cause nausea and vomiting, headaches, drowsiness, fainting, or loss of coordination. It also can put you at risk for internal bleeding, heart problems, and difficulties in breathing. In addition to these dangers, alcohol can make a medication less effective or even useless, or it may make the medication harmful or toxic to your body.

Some medicines that you might never have suspected can react with alcohol, including many medications which can be purchased “over-the-counter”—that is, without a prescription. Even some herbal remedies can have harmful effects when combined with alcohol.

This pamphlet lists medications that can cause harm when taken with alcohol and describes the effects that can result. The list gives the brand name by which each medicine is commonly known (for example, Benadryl®) and its generic name or active ingredient (in Benadryl®, this is diphenhydramine). The list presented here does not include all the medicines that may interact harmfully with alcohol. Most important, the list does not include all the ingredients in every medication.

Medications typically are safe and effective when used appropriately. Your pharmacist or other health care provider can help you determine which medications interact harmfully with alcohol. 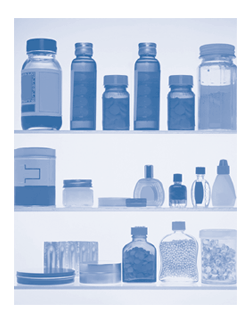 Medicines may have many ingredients

Some medications—including many popular painkillers and cough, cold, and allergy remedies—contain more than one ingredient that can react with alcohol. Read the label on the medication bottle to find out exactly what ingredients a medicine contains. Ask your pharmacist if you have any questions about how alcohol might interact with a drug you are taking.

Certain medicines contain up to 10 percent alcohol. Cough syrup and laxatives may have some of the highest alcohol concentrations.

Women, in general, have a higher risk for problems than men. When a woman drinks, the alcohol in her bloodstream typically reaches a higher level than a man’s even if both are drinking the same amount. This is because women’s bodies generally have less water than men’s bodies. Because alcohol mixes with body water, a given amount of alcohol is more concentrated in a woman’s body than in a man’s. As a result, women are more susceptible to alcohol-related damage to organs such as the liver.

Older people are at particularly high risk for harmful alcohol–medication interactions. Aging slows the body’s ability to break down alcohol, so alcohol remains in a person’s system longer. Older people also are more likely to take a medication that interacts with alcohol—in fact, they often need to take more than one of these medications.

Alcohol and medicines can interact harmfully even if they are not taken at the same time.

Mixing alcohol and medicines puts you at risk for dangerous reactions. Protect yourself by avoiding alcohol if you are taking a medication and don’t know its effect. To learn more about a medicine and whether it will interact with alcohol, talk to your pharmacist or other health care provider.

MedlinePlus
A service of the U.S. National Library of Medicine and the National Institutes of Health.
http://www.nlm.nih.gov/medlineplus/druginformation.html 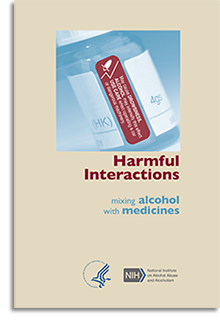 En español
Back to Top