Drinking to the point of a blackout has gained pop culture notoriety in recent years. Alcohol-induced blackouts can lead to impaired memory of events that transpired while intoxicated, and a drastically increased risk of injuries and other harms. They can occur in anyone who drinks alcohol, no matter their age or level of experience with drinking. In this factsheet, we will take a sober look at this common but deeply concerning consequence of alcohol misuse. 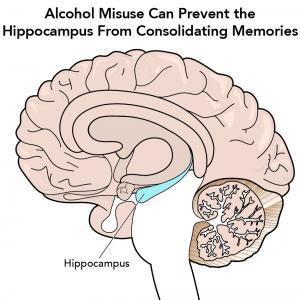 Alcohol-related blackouts are gaps in a person’s memory for events that occurred while they were intoxicated. These gaps happen when a person drinks enough alcohol to temporarily block the transfer of memories from short-term to long-term storage—known as memory consolidation—in a brain area called the hippocampus.

There are two types of blackouts; they are defined by the severity of the memory impairment. The most common type is called a “fragmentary blackout” and is characterized by spotty memories for events, with “islands” of memories separated by missing periods of time in between. This type is sometimes referred to as a grayout or a brownout.

Complete amnesia, often spanning hours, is known as an “en bloc” blackout. With this severe form of blackout, memories of events do not form and typically cannot be recovered. It is as if the events simply never occurred.

When Do Blackouts Occur?

Blackouts tend to begin at blood alcohol concentrations (BACs) of about 0.16 percent (nearly twice the legal driving limit) and higher. At these BACs, most cognitive abilities (e.g., impulse control, attention, judgment, and decision-making) are significantly impaired. The level of impairment that occurs at such high BACs makes the intoxication level associated with blackouts especially dangerous.

Blackouts can occur at much lower BACs in people who drink and take sleep and anti-anxiety medications.

Research indicates that blackouts are more likely to occur when alcohol enters the bloodstream quickly, causing the BAC to rise rapidly. This could happen if someone drinks on an empty stomach or consumes large amounts of alcohol in a short amount of time. Because females, on average, weigh less than males and, pound for pound, have less water in their bodies, they tend to reach higher peak BAC levels than males with each drink and do so more quickly. This helps explain why being female appears to be a risk factor for having blackouts.

Because blackouts tend to occur at high BACs, they commonly stem from binge drinking, defined as a pattern of drinking that increases a person’s BAC to 0.08 percent or higher. This typically occurs after 4 drinks for women and 5 drinks for men—in about 2 hours. In fact, many people who have blackouts do so after engaging in a behavior known as high-intensity drinking, which is defined as drinking at levels that are at least twice as high as the binge-drinking thresholds for women and men.

Blackouts vs. Passing Out

A blackout is not the same as “passing out,” which means either falling asleep or losing consciousness from drinking too much.

During a blackout, a person is still awake but their brain is not creating new memories. Depending on how much the person drank, it is possible to transition from having a blackout to passing out.

Research among college students and other young adults has shown that the frequency of blackouts predicts other alcohol-related consequences (such as missing work or school, having a lower grade point average [GPA], being injured, ending up in the emergency room, getting arrested, or experiencing other negative outcomes). Questions about blackouts during routine medical visits could serve as an important simple screen for the risk of alcohol-related harms.

Blackouts are not necessarily a sign of alcohol use disorder, but experiencing even one is a reason for concern and should prompt people to consider their relationship with alcohol and talk to their healthcare provider about their drinking.

For more information about alcohol and your health, please visit: https://RethinkingDrinking.niaaa.nih.gov