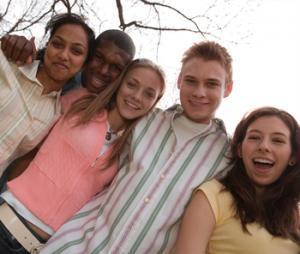 Underage drinking is a serious public health problem in the United States. Alcohol is the most widely used substance among America’s youth, and drinking by young people poses enormous health and safety risks.

The consequences of underage drinking can affect everyone—regardless of age or drinking status.

Either directly or indirectly, we all feel the effects of the aggressive behavior, property damage, injuries, violence, and deaths that can result from underage drinking. This is not simply a problem for some families—it is a nationwide concern.

How much is a drink?

In the United States, a standard drink is one that contains about 14 grams of pure alcohol, which is found in:

The percent of “pure” alcohol, expressed here as alcohol by volume (alc/vol), varies within and across beverage types. Although the “standard” drink amounts are helpful for following health guidelines, they may not reflect customary serving sizes. A large cup of beer, an overpoured glass of wine, or a single mixed drink could contain much more alcohol than a standard drink. 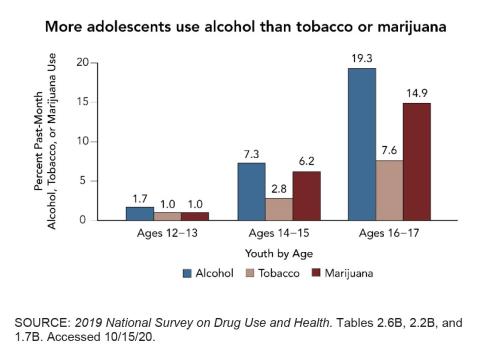 Underage drinking poses a range of risks and negative consequences. It is dangerous because it:

Alcohol is a significant factor in the deaths of people younger than age 21 in the United States each year. This includes deaths from motor vehicle crashes, homicides, alcohol overdoses, falls, burns, drowning, and suicides.

Drinking alcohol can cause youth to have accidents and get hurt. In 2011 alone, about 188,000 people younger than age 21 visited an emergency room for alcohol-related injuries.7

Drinking can lead to poor decisions about taking risks, including unsafe sexual behavior, drinking and driving, and aggressive or violent behavior.

Increases the risk of physical and sexual assault

Underage binge drinking is associated with an increased likelihood of being the victim or perpetrator of interpersonal violence.8

Can lead to other problems

Drinking may cause youth to have trouble in school or with the law. Drinking alcohol also is associated with the use of other substances.

Increases the risk of alcohol problems later in life

Research shows that people who start drinking before the age of 15 are at a higher risk for developing alcohol use disorder later in life. For example, adults ages 26 and older who began drinking before age 15 are 5 times more likely to report having alcohol use disorder in the past year as those who waited until age 21 or later to begin drinking.9

Research shows that young people’s brains keep developing well into their 20s. Alcohol can alter this development, potentially affecting both brain structure and function. This may cause cognitive or learning problems and/or increase vulnerability for alcohol use disorder, especially when people start drinking at a young age and drink heavily.10,11

Why Do So Many Young People Drink?

As children mature, it is natural for them to assert their independence, seek new challenges, and try taking risks. Underage drinking is a risk that attracts many adolescents. They may want to try alcohol but often do not fully recognize its effects on their health and behavior. Other reasons young people drink alcohol include:

What is “binge drinking?”

The National Institute on Alcohol Abuse and Alcoholism (NIAAA) defines binge drinking as a pattern of drinking that brings blood alcohol concentration (BAC) to 0.08 percent—or 0.08 grams of alcohol per deciliter—or higher.* For a typical adult, this pattern corresponds to consuming 4 or more drinks (female), or 5 or more drinks (male), in about 2 hours.16 Research shows that fewer drinks in the same timeframe result in the same BAC in youth; only 3 drinks for girls, and 3 to 5 drinks for boys, depending on their age and size.

Preventing underage drinking is a complex challenge. Any successful approach must consider many factors, including:

Several key approaches have been found to be successful. They are: 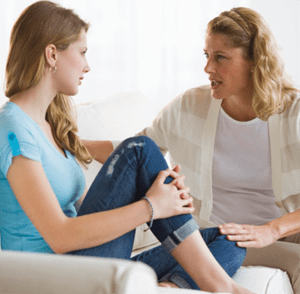 This approach seeks to change the way young people think about alcohol, so they are better able to resist pressures to drink.

These are programs that provide students with the knowledge, skills, motivation, and opportunities they need to remain alcohol-free.

These are efforts to empower parents to set and enforce clear rules against drinking, as well as improve communication between children and parents about alcohol.

This approach makes alcohol harder to get - for example, by raising the price of alcohol and keeping the minimum legal drinking age at 21. Enacting zero-tolerance laws that outlaw driving after any amount of drinking for people younger than 21 also can help prevent problems.

Parents and teachers can play a big role in shaping young people’s attitudes toward drinking. Parents in particular can have either a positive or negative influence.

Parents can help their children avoid alcohol problems by:

On the other hand, research shows that a child with a parent who binge drinks is much more likely to binge drink than a child whose parents do not binge drink.14 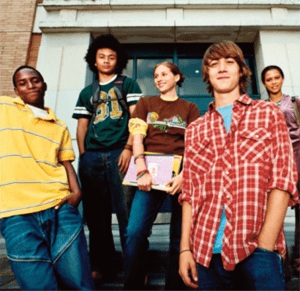 Adolescence is a time of change and growth, including behavior changes. These changes usually are a normal part of growing up but sometimes can point to an alcohol problem. Parents, families, and teachers should pay close attention to the following warning signs that may indicate underage drinking:15

Screening young people for alcohol use and alcohol use disorder is very important and may avoid problems down the road. Screening by a health practitioner (e.g., pediatrician) provides an opportunity to identify problems early and address them before they escalate. It also allows young people to ask questions of a knowledgeable adult. NIAAA and the American Academy of Pediatrics both recommend that all youth be regularly screened for alcohol use.

Some young people can experience serious problems as a result of drinking, including alcohol use disorder, which require intervention by trained professionals. Professional treatment options include:

1 Substance Abuse and Mental Health Services Administration (SAMHSA). 2019 National Survey on Drug Use and Health. Table 2.6B— Alcohol Use in Lifetime, Past Year, and Past Month among Persons Aged 12 or Older, by Detailed Age Category: Percentages, 2002-2019.  https://www.samhsa.gov/data/sites/default/files/reports/rpt29394/NSDUHDetailedTabs2019/NSDUHDetTabsSect2pe2019.htm#tab2-6b. Accessed 10/7/20.

2 Substance Abuse and Mental Health Services Administration (SAMHSA). 2019 National Survey on Drug Use and Health. Table 7.16A— Alcohol Use in Lifetime, Past Year, and Past Month among Persons Aged 12 to 20, by Gender: Numbers in Thousands, 2002-2019.  https://www.samhsa.gov/data/sites/default/files/reports/rpt29394/NSDUHDetailedTabs2019/NSDUHDetTabsSect7pe2019.htm#tab7-16a. Accessed 9/15/20.

4 Calculated using past 30-day quantity and frequency of alcohol use and past 30-day frequency of binge drinking (4+ drinks for females and 5+ drinks for males on the same occasion) from the 2018 NSDUH public-use data file. SAMHSA, Center for Behavioral Health Statistics and Quality. National Survey on Drug Use and Health 2018 (NSDUH- 2018-DS0001) Public-Use File Dataset. https://www.datafiles.samhsa.gov/study-dataset/national-survey-drug-use-and-health-2018-nsduh-2018-ds0001-nid18758. Accessed 11/18/19.

5 Population prevalence estimates (%) are weighted by the person-level analysis weight and derived from the Center for Behavioral Health Statistics and Quality National Survey on Drug Use and Health 2018 (NSDUH-2018-DS0001) Public-Use File Dataset. Binge alcohol use is defined as drinking 5 or more drinks on the same occasion for males or 4 or more drinks on the same occasion for females on at least 1 day in the past 30 days. Any alcohol is defined as a drink of an alcoholic beverage (a can or bottle of beer, a glass of wine or a wine cooler, a shot of distilled spirits, or a mixed drink with distilled spirits in it), not counting a sip or two from a drink. https://www.datafiles.samhsa.gov/study- dataset/national-survey-drug-use-and-health-2018-nsduh-2018-ds0001-nid18758. Accessed 11/18/19.

9 The comparison of risk for an alcohol use disorder between different ages at drinking onset is based on the prevalence ratio; the comparison of the increased risk between genders is based on the ratio of the prevalence ratios. The estimates are weighted by the person-level analysis weight and derived from the Center for Behavioral Health Statistics and Quality National Survey on Drug Use and Health 2018 (NSDUH-2018-DS0001) Public-Use File Dataset. Age at drinking onset: age when first drank an alcoholic beverage (a can or bottle of beer, a glass of wine or a wine cooler, a shot of liquor, or a mixed drink with liquor in it), not counting a sip or two from a drink. Alcohol use disorder: alcohol dependence or abuse based on the criteria in the American Psychiatric Association (APA) Diagnostic and Statistical Manual of Mental Disorders, 4th edition (DSM-IV). https://www.datafiles.samhsa.gov/study-dataset/national-survey-drug-use-and-health-2018-nsduh-2018-ds0001-nid18758. Accessed 11/18/19.

15 Substance Abuse and Mental Health Services Administration. How to tell if your child is drinking alcohol. https://www.samhsa.gov/underage-drinking/parent-resources/how-tell- if-your-child-drinking-alcohol. Accessed May 30, 2018.