For questions about CME/CE certification, please contact the Postgraduate Institute for Medicine (PIM) at inquiries@pimed.com

Neuroscience: The Brain in Addiction and Recovery

The plasticity of the human brain contributes to both the development of and recovery from alcohol use disorder (AUD). Within the brain, individual genetic and environmental factors interact at molecular, neuronal, and circuit levels to influence a person’s vulnerability to AUD.1,2 Thus, each person’s path to AUD is shaped by a unique set of variables, and as a result, different people will have different levels of severity and types of dysfunction that may require different treatment approaches.3

Alcohol produces chemical imbalances in specific neurocircuits and can be neurotoxic. Chronic heavy drinking can, for example, damage brain regions involved in memory, decision-making, impulse control, attention, sleep regulation, and other cognitive functions.4,5 Once AUD develops and progresses, these and other brain changes can make it very difficult to stop drinking without assistance.1

Here, we outline a framework for understanding alcohol-induced changes in the brain, which can help you appreciate the challenges faced by many patients with AUD when they try to cut back or quit drinking. We then describe evidence-based treatments you can recommend to patients to help the brain, and the patient as a whole, to recover.

How does the brain change as AUD develops?

The brain mediates our motivation to repeat behaviors that lead to pleasurable, rewarding states or reduce uncomfortable, distressing physical or emotional states. In this context, drinking alcohol can be motivated by its ability to provide both relief from aversive states and reward. These dual, powerful reinforcing effects help explain why some people drink and why some people use alcohol to excess. With repeated heavy drinking, however, tolerance develops and the ability of alcohol to produce pleasure and relieve discomfort decreases.

Below is a brief overview of the current knowledge of the brain structures and circuitry involved in the cycle of alcohol addiction,1 which aligns symptomatically with moderate to severe AUD.7 (The current AUD diagnostic criteria are listed in the Core articles on AUD and assessment.)

Although alcohol initially suppresses activity in the extended amygdala and reduces stress responses, excessive alcohol use can lead to tolerance and the need to drink more to find relief. After drinking stops, during withdrawal, the amygdala circuits become hyperactive, leading to hyperkatifeia, or heightened negative emotional states, such as irritability, anxiety, dysphoria, and emotional pain. This discomfort, often described as misery, can motivate some people to drink alcohol again and repeat the cycle of drinking and withdrawal. Research suggests that among people with negative emotional states, self-medication with alcohol to help cope with mood symptoms increases the risk for developing AUD.8

Like its effects on emotional pain, alcohol can temporarily reduce physical pain. Research suggests that reduction of pain only occurs at or above binge levels of drinking (reaching a blood alcohol concentration of 0.08% or above, typically after 4 or more drinks for women and 5 or more drinks for men within about 2 hours).9,10 As blood alcohol concentrations decrease, however, the sensation of pain returns even more intensely. This again leads to a cycle of misregulation,11 that is, using a “solution” that ultimately makes the problem worse. The discomfort or misery felt during withdrawal, including negative emotional states, is the leading precipitant of relapses in patients recovering from AUD.12,13

Figure 1. Conceptual framework for the neurobiological bases of addiction (and the brain areas involved)

Addiction can be described as a repeating three-stage cycle, with each stage associated with different brain regions, neurocircuits, and neurotransmitters.1 Drawn from decades of research, this cycle models processes that people with addiction may experience repeatedly over the course of a day, weeks, or months.1,16,17 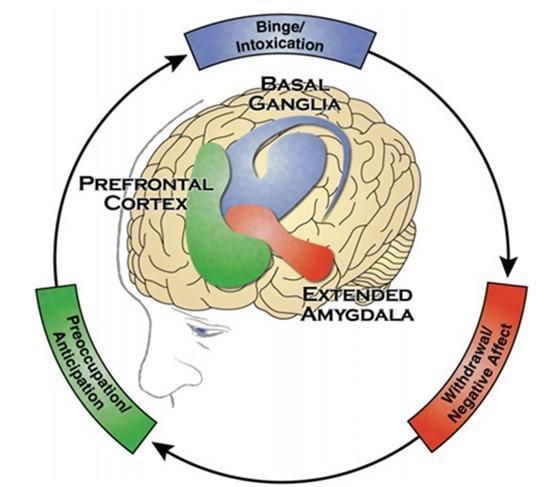 The binge/intoxication stage (associated with circuits in the basal ganglia): The person drinks alcohol, which activates reward circuits and engages “incentive salience” circuits. Incentive salience circuits link the pleasurable, rewarding experience with “cues,” that is, the people, places, and things present when drinking, such that the cues themselves gain motivational significance. These and other neurocircuits help develop and strengthen habitual drinking and may lay the groundwork for compulsive use of alcohol. Neurotransmitters associated with this stage include dopamine, GABA, glutamate, and opioid peptides.

The withdrawal/negative affect stage (associated with circuits in the extended amygdala): When the person stops drinking, reward circuit activity decreases while stress circuits activate. Together, these changes fuel negative emotional states such as anxiety, dysphoria, and irritability. The person feels alcohol is needed for temporary relief from discomfort and emotional pain. This stage involves (1) the loss of reward neurotransmitters—as in a hypodopaminergic state, (2) the activation of stress neurotransmitters—such as corticotropin releasing factor, dynorphin, norepinephrine, hypocretin, and vasopressin—and possibly proinflammatory immune agents, and (3) the inhibition of anti-stress neurotransmitters—such as neuropeptide Y, nociceptin, endocannabinoids, and oxytocin.

The preoccupation/anticipation stage (associated with circuits in the prefrontal cortex): The person with an addiction has impairments in executive function processes that normally limit impulsive and compulsive responses. The person has strong urges or cravings to drink, especially in response to stress, related negative emotions, and cues that are part of the incentive salience circuits activated in the first stage of the cycle. Neurotransmitters associated with this stage include glutamate and ghrelin.

For more information, see this seven-minute video on the Neurocircuitry of AUD.

What do healthcare professionals who work with adolescents need to know about alcohol?

The developing adolescent brain is particularly vulnerable to alcohol-related harm. Alcohol is a powerful reinforcer in adolescents because the brain’s reward system is fully developed while the executive function system is not, and because there is a powerful social aspect to adolescent drinking. Specifically, prefrontal regions involved in executive functions and their connections to other brain regions are not fully developed in adolescents, which may make it harder for them to regulate the motivation to drink. Because the brain is adaptable and learns quickly during adolescence, and because alcohol is such a strong reinforcer for adolescents, alcohol use is more likely to be repeated, become a habit, and eventually evolve into a problematic drinking pattern that may lead to AUD.

When adolescents drink heavily, alcohol can disrupt critical brain development patterns18,19 by accelerating the volume decline in frontal cortical gray matter that typically occurs in early adolescence and by slowing the volume increase in white matter that typically occurs in late adolescence.20 In addition, heavy drinking in adolescence increases the risk for developing AUD later in life, with the earlier the onset of any drinking, the greater the AUD risk.21,22

In short, alcohol use during adolescence can interfere with structural and functional brain development and increase the risk for AUD not only during adolescence but also into adulthood. To help clinicians prevent alcohol-related harm in adolescents, NIAAA developed a quick and effective screening tool and a clinician’s guide (see Resources below).

How does the brain recover?

Just as brain plasticity contributes to the development of AUD, it can be harnessed to help the brain heal and to establish healthy behavior patterns that facilitate recovery. The extent of the brain’s capacity to return to “normal” following long-term sobriety is not fully understood.23 However, a growing number of studies indicate that at least some AUD-induced brain changes—and the changes in thinking, feeling, and behaving that accompany them—can improve and possibly reverse with months of abstinence.15,24 Even in individuals with lingering alterations in brain circuitry and function due to AUD, there is evidence that other circuits can compensate to help restore compromised function.20,25,26

Healthcare professionals offer two types of evidence-based treatments for AUD that help the brain and the patient as a whole to recover: FDA-approved AUD medications and behavioral healthcare.

Together, medication and behavioral health treatments can facilitate functional brain recovery. For more details, see the Core article on treatment.

In closing, brain alterations underlying addiction not only drive the addiction process itself but also make it difficult for many people with AUD to change their drinking behavior, particularly if they are struggling to cope with the considerable discomfort of acute or protracted withdrawal. You can promote healthy changes in the brains and behaviors of patients with AUD by encouraging them to take a long-term, science-based approach to getting better. For practical, evidence-based tips on supporting your patients with AUD, see the Core articles on treatment, referral, and recovery.

Neurobiology of Alcohol Use Disorder

More resources for a variety of healthcare professionals can be found in the Additional Links for Patient Care.

We invite healthcare professionals including physicians, physician assistants, nurses, pharmacists, and psychologists to complete a post-test after reviewing this article to earn FREE continuing education (CME/CE) credit. This CME/CE credit opportunity is jointly provided by the Postgraduate Institute for Medicine and NIAAA.

CME/CE Activity — Neuroscience: The Brain in Addiction and Recovery

Please note that you will need to log into or create an account on CME University in order to complete this post-test.

After completing this activity, the participant should be better able to:

Contributors to this article for the NIAAA Core Resource on Alcohol include the writers for the full article, content contributors to subsections, reviewers, and editorial staff. These contributors included both experts external to NIAAA as well as NIAAA staff.

Maureen B. Gardner
Project Manager, Co-Lead Technical Editor, and
Writer for the Core Resource on Alcohol,
Division of Treatment and Recovery, NIAAA

Complete CME/CE Post-Test
Back to Top