Alcohol is part of our society. People use it to celebrate, socialize, relax, and enhance the enjoyment of meals. Nearly 90 percent of adults in the United States report that they drank alcohol at some point in their lifetime, and more than half report drinking in the last month.1 Although most people drink in moderation, nearly 40 percent of U.S. adults drink in excess of the low-risk guidelines established by the National Institute on Alcohol Abuse and Alcoholism (NIAAA).2 (See “Drinking Patterns and Their Definitions.”)

Alcohol misuse has wide-ranging adverse consequences. In the United States, nearly 88,000 people per year die from alcohol-related causes;3 globally, alcohol accounts for 3.3 million deaths—5.9 percent of all deaths—each year.4 Alcohol misuse also contributes to poor performance at school and work; family problems; unprotected sex and sexually transmitted diseases; violence; memory blackouts; unintentional injuries, accidents, and overdoses; and organ damage and disease. It can lead to alcohol use disorder (AUD), a serious chronic condition that affects nearly 16 million people in the United States.5 (See “What Is Alcohol Use Disorder?”) The Centers for Disease Control and Prevention estimates that alcohol misuse, including AUD, costs the United States $249 billion per year due to health care expenses, lost workplace productivity, crime, property damage, and other outcomes.6

NIAAA, a component of the National Institutes of Health (NIH), is the largest funder of alcohol research in the world. For nearly five decades, NIAAA’s extramural research program has supported a diverse portfolio of innovative investigator-initiated research to elucidate the effects of alcohol on health and reduce the burden of alcohol misuse for individuals at all stages of life. This work is complemented by a robust intramural research program that leverages the state-of-the-art resources available at NIH to advance high-risk, high-reward studies in key areas of alcohol science. In addition, through the Collaborative Research on Addiction at NIH (CRAN) initiative, NIAAA is partnering with the National Institute on Drug Abuse and the National Cancer Institute to integrate resources and expertise across NIH to develop a comprehensive, well integrated understanding of substance use, misuse, and addiction that considers the common and distinctive features of addictive substances and substance use disorders (SUDs).

Research supported by NIAAA has spurred tremendous progress in identifying the factors that contribute to alcohol-related problems and the fundamental biological and behavioral mechanisms by which they develop, and it has paved the way for innovative preventive and treatment interventions. Once viewed as a moral failing or character flaw, AUD is now widely regarded as a chronic but treatable brain disease that develops through complex, dynamic interactions among biological, environmental, and developmental factors. This shift in perspective, bolstered by decades of research on the neurobiology of addiction, has helped reduce the stigma associated with AUD and has underscored the need for a multipronged approach to preventing and treating alcohol-related problems, with interventions designed for individuals, families, communities, and society at large.

This strategic plan serves as a roadmap for catalyzing continued progress across the spectrum of alcohol research and translating these advances for the benefit of the public. It highlights NIAAA’s research goals in five key areas:

Along with the goals outlined above, NIAAA has identified several cross-cutting research themes, which are woven throughout this strategic plan.

Address Alcohol Misuse Across the Lifespan

Human biology and behavior change throughout life; these changes affect drinking patterns and risks for alcohol-related injury and disease. NIAAA has adopted a “lifespan approach” to alcohol research that considers how the emergence and progression of drinking behavior and related outcomes interact with developmental changes and environmental inputs across the lifespan, from the embryonic and fetal stages of development into older adulthood. This perspective guides the identification of life-stage–appropriate strategies for preventing, treating, and facilitating recovery from alcohol problems, as well as tailoring resources to the needs of individuals of all ages.

AUD frequently co-occurs with other SUDs and mental health conditions, including major depressive disorder, anxiety disorders, bipolar disorder, antisocial and borderline personality disorders, and post-traumatic stress disorder (PTSD). Individuals suffering from psychiatric comorbidity tend to have a poorer prognosis, higher risk for treatment dropout, less support for sobriety from their families and in the workplace, and a higher risk for suicide. Alcohol misuse also contributes to more than 200 diseases and injury-related health conditions,9 including alcoholic liver disease. In fact, alcohol is involved in nearly half of all liver disease deaths in the United States each year.10 Alcohol misuse frequently co-occurs with human immunodeficiency virus (HIV), contributes to HIV transmission, reduces HIV screening, makes it difficult to follow complex HIV medication regimens, and contributes to or exacerbates other health conditions in HIV-infected individuals. NIAAA will continue to support research to investigate the relationships between AUD and co-occurring conditions and to develop interventions to prevent and treat them.

Some groups of people may be more vulnerable to alcohol problems than others. For example, although Native Americans are less likely to drink than white Americans, those who do drink are more likely to binge drink,11 have a higher rate of past-year AUD compared with other racial and ethnic groups,12 and are approximately twice as likely to die from alcohol-related causes than the general American public.13 In addition, Hispanics and blacks who drink are more likely to binge drink than whites who drink,11 but Hispanics with AUD are less likely than whites with AUD to receive alcohol treatment at a specialty facility.14 The lesbian, gay, bisexual, and transgender communities are also important subpopulations to consider. Lesbian and bisexual women are about seven times more likely than heterosexual women to meet criteria for AUD.15 Although rates of alcohol use and AUD among men who have sex with men (MSM) are comparable to rates in the general population, alcohol misuse among MSM is an important public health problem. Alcohol misuse is a known risk factor for HIV, and MSM account for more than half of all new HIV infections each year in the United States.16 NIAAA is committed to ensuring that all people benefit from alcohol research advances and will support studies to better understand health disparities and develop interventions for at-risk groups.

Studies investigating how individual variability in genes, environment, and lifestyle contribute to disease are bringing us closer to developing individually tailored interventions for alcohol-related conditions. NIAAA will continue to support research on the factors that contribute to individual variation in alcohol misuse, AUD, and alcohol-related outcomes. The Institute will use that information to guide the development and validation of prognostic and diagnostic biomarkers and personalized interventions for these conditions. These efforts will be aided by the recent expansion of electronic medical records and the development of mobile health technologies, which have the potential to improve the quality and collection of patient data and to provide comprehensive, personalized health care services where and when patients need them.

Cultivating a talented and diverse research workforce is essential to advancing the frontiers of scientific knowledge and to translating research findings into practice. NIAAA promotes alcohol research training through individual pre- and postdoctoral fellowships, institutional training grants, and career development awards that span the breadth of NIAAA’s research portfolio. Diverse research teams broaden the scope of scientific inquiry, bring creative solutions to bear on complex scientific problems, and encourage research relevant to the health care needs of underserved populations. Programs to identify, recruit, and train scientists from diverse populations, especially those underrepresented in health research, are an important component of NIAAA’s training portfolio.

Serve as a Responsible Steward of Our Nation’s Research Resources

Underpinning NIAAA’s ability to advance innovative science is an unwavering commitment to responsible research stewardship. NIAAA supports efforts to enhance the rigor and reproducibility of research, including ensuring that sex is incorporated as a biological variable into the design, analysis, and scientific reporting of the studies it funds. This is a critical step toward ensuring that everyone, regardless of sex or gender, benefits from alcohol research advances. NIAAA maximizes the use of research resources by forging strategic partnerships with other NIH Institutes, Centers, and Offices; other Federal agencies; academia; industry; and not-for-profit organizations. Such partnerships provide opportunities to share resources and expertise, and to broaden the dissemination of alcohol research findings. Moreover, by encouraging the use of common research metrics and protocols, as well as the sharing, aggregation, and secondary analysis of data, NIAAA hopes to improve the efficiency of alcohol research and stimulate new insight into preventing and treating alcohol-related conditions.

Drinking Patterns and Their Definitions

What Is a Standard Drink?

Many people are surprised to learn what counts as a drink. The amount of liquid in your glass, can, or bottle does not necessarily match how much alcohol is in your drink. Different types of beer, wine, or malt liquor can have very different amounts of alcohol. For example, many light beers have almost as much alcohol as regular beer—about 85 percent as much. 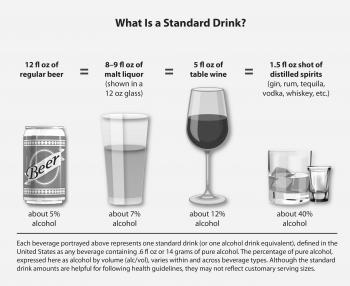 According to the Dietary Guidelines for Americans,7 which are intended to help individuals improve and maintain overall health and reduce the risk of chronic disease, moderate drinking is up to one drink per day for women and up to two drinks per day for men.

Alcohol misuse refers to drinking in a manner, situation, amount, or frequency that could cause harm to the users or to those around them. For individuals younger than the legal drinking age of 21, or for pregnant women, any alcohol use constitutes misuse.

NIAAA defines binge drinking as a pattern of drinking that brings blood alcohol concentration levels to 0.08 g/dL (0.08 percent) or higher. This typically occurs after a woman consumes four drinks or a man consumes five drinks in a 2-hour time frame.

Extreme binge drinking, also known as high-intensity drinking, refers to drinking at levels far beyond the binge threshold, resulting in high peak blood alcohol concentrations. Though definitions vary, some studies define extreme binge drinking as 2 or more times the gender-specific binge drinking thresholds (i.e., 10 or more standard drinks for men; 8 or more for women); other studies use a higher threshold that may or may not be gender specific.

SAMHSA defines heavy drinking as binge drinking (based on the SAMHSA binge drinking thresholds described above for men and women) on 5 or more days in the past 30 days.

Certain people should avoid alcohol completely, including those who:

What Is Alcohol Use Disorder? 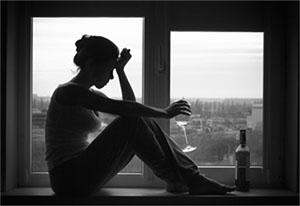 Alcohol use disorder (AUD) is a medical condition that doctors diagnose when a patient’s drinking causes distress or harm. It ranges from mild to severe and is characterized by clinically significant impairments in health and social function. To be diagnosed with AUD, a person must meet certain diagnostic criteria outlined in the Diagnostic and Statistical Manual of Mental Disorders (DSM).8 The current DSM (DSM-5) integrates the two DSM–IV disorders, alcohol abuse and alcohol dependence, into a single disorder called AUD. Under DSM-5, anyone meeting any 2 of the 11 criteria during the same 12-month period is diagnosed with AUD. The severity of AUD is based on the number of criteria a person meets—mild (2–3), moderate (4–5), or severe (6 or more).

To assess whether someone has AUD, a health care provider may ask him or her some questions. For example, in the past year, have you:

Any of these symptoms may be a cause for concern. The more symptoms one has, the more urgent the need for change.