What Is Binge Drinking? 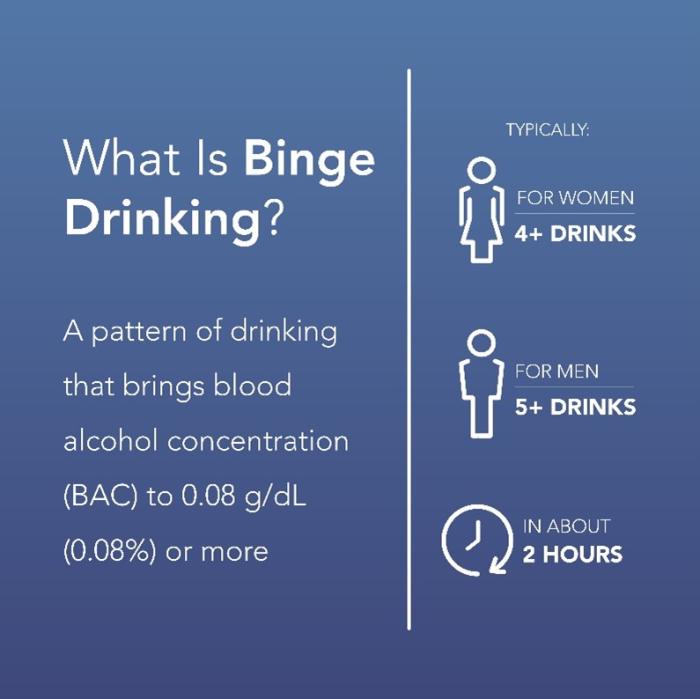 The National Institute on Alcohol Abuse and Alcoholism defines binge drinking as a pattern of drinking alcohol that brings blood alcohol concentration (BAC) to 0.08 percent—or 0.08 grams of alcohol per deciliter—or higher. For a typical adult, this pattern of alcohol misuse corresponds to consuming 4 or more drinks (female), or 5 or more drinks (male) in about 2 hours. Research shows that fewer drinks in the same timeframe result in the same BAC in youth; only 3 drinks for girls, and 3 to 5 drinks for boys, depending on their age and size.1

How Common Is Binge Drinking?

According to the 2019 National Survey on Drug Use and Health, about 66 million, or about 24 percent of people in the United States ages 12 and older reported binge drinking during the past month.2 While binge drinking is a concern among all age groups, there are important trends in the following age groups:

What Are the Consequences and Health Effects of Binge Drinking?

While drinking any amount of alcohol can carry certain risks (for information on impairments at lower levels, please see this chart), crossing the binge threshold increases the risk of acute harm, such as blackouts and overdoses. Binge drinking also increases the likelihood of unsafe sexual behavior and the risk of sexually transmitted infections and unintentional pregnancy. These risks are greater at higher peak levels of consumption. Because of the impairments it produces, binge drinking also increases the likelihood of a host of potentially deadly consequences, including falls, burns, drownings, and car crashes.

Alcohol affects virtually all tissues in the body. Data suggest that even one episode of binge drinking can compromise function of the immune system and lead to acute pancreatitis (inflammation of the pancreas) in individuals with underlying pancreatic damage. Alcohol misuse, including repeated episodes of binge drinking, over time contributes to liver and other chronic diseases, as well as increases in the risk of several types of cancer, including head and neck, esophageal, liver, breast, and colorectal cancers.

How Does Binge Drinking Affect Adolescents?

Brain development, once thought to taper off at the end of childhood, enters a unique phase during the adolescent years. Research indicates that repeated episodes of binge drinking during the teen years can alter the trajectory of adolescent brain development and cause lingering deficits in social, attention, memory, and other cognitive functions.8

What Is “High-Intensity” Drinking?

This pattern of drinking is of particular concern because it is associated with an even greater risk of severe health and safety consequences. More research is needed to identify interventions that can be used to discourage this pattern of use.

3 Substance Abuse and Mental Health Services Administration (SAMHSA). 2019 National Survey on Drug Use and Health (NSDUH). Table 2.7B—Alcohol Use, Binge Alcohol Use, and Heavy Alcohol Use in Past Month Among Persons Aged 12 or Older, by Detailed Age Category: Percentages, 2018 and 2019. Available at: https://www.samhsa.gov/data/sites/default/files/reports/rpt29394/NSDUHD…. Accessed January 6, 2021.

4 Substance Abuse and Mental Health Services Administration (SAMHSA). 2019 National Survey on Drug Use and Health (NSDUH). Table 6.21B—Types of Illicit Drug, Tobacco Product, and Alcohol Use in Past Month among Persons Aged 18 to 22, by College Enrollment Status and Gender: Percentages, 2018 and 2019. Available at: https://www.samhsa.gov/data/sites/default/files/reports/rpt29394/NSDUHD…. Accessed February 25, 2021.